SHOE OF THE SEASON: MANOLO BLAHNNIK FOR CHRISTOPHER KANE 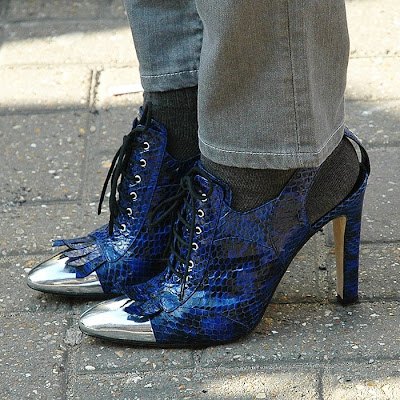 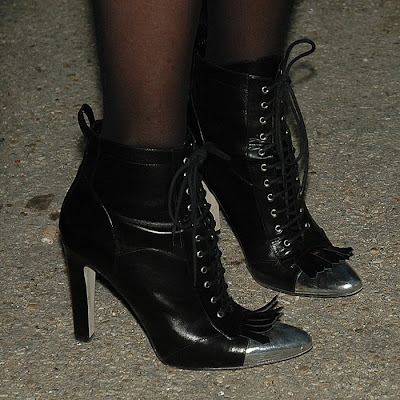 Carine Roitfeld in her shoe of choice for Paris Fashion Week

Last season, I could barely grab a glimpse from where I was standing of the shoes designed by Manolo Blahnik for Christopher Kane at the Spring/Summer 08 show. All I could see were lace-up ankle boots with silver cap toes. As these spectacular boots paraded by, I immediately thought to myself, "How amazing would it be if these were actually produced to sell and not just for viewing pleasure on the catwalk." So to my surprise, I had my first sighting of them outside the Marios Schwab fashion show. I was busy taking someone else's photo but I quickly turned and took a quick photo of them before the woman sporting them jetted off. After being able to get a closer look, I could finally put my finger on what they reminded me of: part cowboy boot, part loafer and part fetishistic ankle boot. How fabulous and kinky is that combination.

Two weeks later in Paris, I wasn't surprised to see Carine Roitfeld sporting them outside the Balmain show. But I was surprised to see her sport them everyday to the shows. It was unlike her to wear the same thing more than once during fashion week but I guess when something is so utterly fabulous as this boot, you can't help but want to wear it all the time. That's the thing about a really great shoe.
Posted by JAK & JIL at 1:06 AM

i just had an orgasm looking at those shoes. truly to die for.

i think she wore them as sort of a test to see if the public liked them or not. So that they could go into production. She is after all always in the fashion public's eye.

i absolutely am in love with these shoes.

Those shoes cause me to drewl with desire! I agree with madhatter on this one! P.S. your blog has been one of my favorites since I found it randomly in a magazine article, I believe in NYLON? GORGEOUS! GORGEOUS! GORGEOUS!

not quite cowboy boot. that style of laceup with the fringe is distinctive of roper/ paddock boots. my favourite all purpose shoe